// RITE of ILK
RITE of ILK is a local co-operative exploration game that revolves around the lives of two children who are forced to venture through unknown lands to save their tribe from the edge of extinction. All while being tied together by a rope. The two must trek through treacherous environments, solve environmental puzzles, and return peace to their home.

ILK’s two protagonists, Mokh and Tarh, must learn to collaborate and overcome obstacles together by turning the rope’s limitations and restrictions into their advantage. The rope’s limited length forces the players to closely communicate on how to overcome certain challenges. The players team up, explore ancient ruins, unravel mysteries, and face a greater power -- together -- because it’s all about cooperation.

RITE of ILK started off as a student project for three months where we showcased a playable demo of the concept, to an individual graduation project of three months. Since graduation started our own company (six turtles) and working full-time on the game to bring couch co-op back.

- Setting up workflow & pipeline, not only in code, but also with art, design, audio and hardware. And make sure the workflow & pipeline is suitable for all disciplines.
- Setting up naming & code conventions based off Unreal Engine's code conventions
- Debugging (crash logs) and QA-ing (bugs and new features)
- Optimizing the game where is needed and possible (i.e. minimum hardware and maximum hardware)
- Using Unreal Engine 4 Blueprints and/or C++ and extended where needed

Core mechanic of the game is that the rope is attached to Player A and Player B. It restricts the player from able to move far away from eachother thus also creates a lot of puzzle solving thinking. Here you can see the rope in action: https://www.youtube.com/watch?v=no4KiJtY6Zw. This allowed us to do these kind of gameplay mechanics:

This started off as a developers feature which got implemented in the game as a gameplay mechanic. When the rope got stuck in obstacles and what more, we developers needed a quick way to unstuck the rope and have the other player spawned right next to you. This started as a simple developers feature which got reduced the stress/irritations of players have to wait everytime by the other player before they can continue their journey, even in tight movements this is not something you want to happen. Thus the teleport mechanic via the rope has been introduced and it might feel off at first but during playing it feels natural.

We've been using Wwise as our 3rd party audio engine to enhance the workflow of audio implementation together with our audio designers. 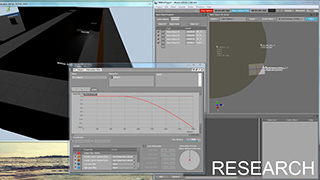 Here you can hear a before and after video of UE4 implementation and Wwise implementation of the Rope Pillar Mechanic (https://www.youtube.com/watch?v=-bCAf7ULhy0).

- Due NDA no source are available.